Its cause and diagnosis

This article is a great resource for understanding CA in our breed. A must read before you view the CA registry.

To understand the diagnosis of cerebellar abiotrophy (CA) in the Old English Sheepdog, you must understand the condition. CA causes a progressive loss of muscular coordination. It is not a painful condition, does not cause muscular weakness, and does not affect the mind of the dog. CA is a simple autosomal recessive genetic disorder. This means that for a dog to be affected, both parents have to be a carrier of the defective gene. Carriers do not show signs of the condition, and do not differ from other normal dogs except for their ability to pass the defective gene to approximately half of their offspring. 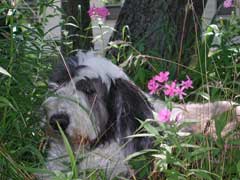 The cerebellum controls muscular coordination in the body. CA causes a specific cell, called a Purkinje cell to die off in the cerebellum. The Purkinje cell acts as a connector between several other cells in the cerebellum to control a process called proprioception. This process allows the mind to recognize where your limbs and body are “in space.” Because of this process, you can close your eyes and touch your nose, because you “know” where your nose and hand are. This process is progressively lost in CA.

CA manifests itself as an over and under modulation in muscle activity. Affected dogs cannot smoothly control the rate, force, and range of their movements. This can cause an over-reaching and high stepping gait. When going up and down stairs, they can float their front legs out, because they don’t know where their leg is in relationship to the stair. This is a very specific movement for CA. It has caused some owners to question whether their dog may have a problem with vision, which is normal. Affected dogs also often stumble or miss a step with their hind paws.

There can also be abnormal body movements of the trunk, with swaying of the pelvic limbs, and a characteristic bounce of the hind end. There can also be a mild disturbance of balance in CA, where affected dogs can fall over, but then get right up. All four limbs are affected with CA. The severity of clinical signs is symmetrical between the left and right sides of the body, although the forelimbs or hindlimbs may be more significantly affected.

There is a great range of severity of affected Old English Sheepdogs. Some can progress in their severity to the point that they fall all the time, while others can remain mildly affected and only show limited signs of incoordination. Some dogs plateau and their clinical signs can remain static for long periods of time, while others can slowly progress over months to years.

CA is a constant condition. Affected dogs always have the disability, though it may not be evident with all motion. Clinical signs of CA are most evident when observing complex movements, such as running and stairwalking. Such complex maneuvers are more than most CA affected dogs can deal with through their ability to concentrate. 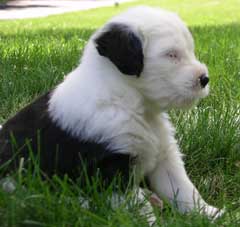 Some Old English Sheepdogs affected with CA can compensate for the lack of proprioceptive control by watching where they place their feet, and consciously “learning” everyday movements that would be automatic for any other dog. Some dogs that have a specific set of stairs that they use every day, can learn to place one foot at a time, and get up and down cleanly. For these dogs, their clinical signs become more evident when they are tired or excited (and can’t concentrate as well). For this reason the classical signs of CA may be most evident when running and chasing a ball, or doing a “new” set of stairs that the dog may not be used to.

Because of the ability for some CA affected dogs to compensate, their clinical signs of incoordination may appear episodic, rather than constant. If an owner only sees the signs when the dog is running, they may think that the running causes the onset of signs.

Together with Dr. Natasha Olby (North Carolina State Univ.) and Dr. Alexander de Lahunta (retired, Cornell Univ.), we have been studying cerebellar abiotrophy in several animal species and several breeds of dogs. Each breed with CA has the same pathological cause; that being the degeneration of the Purkinje cells of the cerebellum. The dog breeds with the most similar CA presentations as the Old English Sheepdog include the Gordon Setter, Scottish Terrier, American Staffordshire Terrier, and Spinone Italiano. All of these breeds show a later onset, slowly progressive form of CA.

The most definitive diagnosis of CA is through a pathological examination of the brain and cerebellum after death. The degeneration of the Purkinje cells (with the secondary changes that occur due to this degeneration) confirms the pathological diagnosis. Because of the size of the Purkinje cells, their cellular processes (axons and dendrites), and the stimulation of the cells that they connect to, there is a gross reduction in size and weight of the cerebellum compared to the rest of the brain in CA affected dogs.

The reduction in size of the cerebellum can be measured by magnetic resonance imaging (MRI) in a live dog, and has been used as another diagnostic parameter in CA affected dogs. This was documented in South African CA affected Scottish Terriers in a veterinary journal article. However, at this time, the extent of degeneration that is necessary to cause a measurable gross reduction in the size of the cerebellum has not been established. Because of this, an MRI may not be able to diagnose CA in dogs who are young, whose disease process is not longstanding, or whose clinical signs (and therefore the amount of Purkinje cell degeneration) are mild. The criteria for MRI diagnosis in CA affected dogs with different degrees of severity are one aspect of the ongoing CA research. 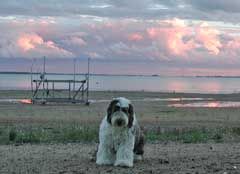 As most Old English Sheepdogs with CA are expected to live a normal lifespan, the majority of CA affected Old English Sheepdogs will receive a clinical diagnosis of the disorder. It would be unfair and wrong to euthanize these special dogs simply to establish a pathological diagnosis. A clinical diagnosis of CA requires documentation of the specific clinical history, progression, and neurological signs that are consistent with the condition, and that rule out other causes. This can be a confusing process to an owner that does not understand the differences in movement between a dog affected with CA, and other dogs whose movement disorders can be due to other causes.

Other disorders that can cause clinical signs of an abnormal gait include brain infections (encephalitis), toxins, injury, spinal cord disorders, luxating patellas, and other musculoskeletal abnormalities. CA affects all four limbs. The signs are always symmetrical between the left and right sides of the body, although either the forelimbs or the hindlimbs may be more severely affected in each dog. This differentiation eliminates most musculoskeletal abnormalities. Spinal cord abnormalities (including “Wobblers” and intervertebral disc disease) cause pain and weakness, as well as either a sinking or stilted gait (depending on the location of the lesion in the spinal cord).

Encephalitis and toxins will cause more injury in the brain than just the Purkinje cells, and this will be evident in the clinical examination. There are no toxins found to selectively affect just the cerebellar Purkinje cells. Infections and toxins will also present with an acute onset, and more rapid progression than seen with CA. These same differences will be evident with a brain injury. The cerebellum is in a protected area of the skull. If this area of the brain were injured, the clinical signs would be representative of more than a pure Purkinje cell degeneration. In addition, all of these conditions are likely to present with asymmetrical clinical signs.

A clinical diagnosis of cerebellar abiotrophy is best obtained through a neurological examination by an ACVIM board-certified neurologist, in consultation with Dr. Olby. I also offer a videotape review of dogs suspected of being affected with CA with Dr. de Lahunta. In order to make a clinical diagnosis based on videotape, the classical movements that would separate CA from other disorders during a neurological examination need to be present. The clinical history and progression of the clinical signs must also be compatible with CA.

The specific neurological movements of CA that must be present on a videotape for a clinical diagnosis are best shown when stairwalking, and running or chasing a toy off lead. There are several owners who have submitted videotapes of their Old English Sheepdogs that probably have CA. However, a clinical diagnosis has not been offered in these dogs, because the confirming and ruling out movements are not present in the video. In these cases, we recommend that the dog be examined by a neurologist. 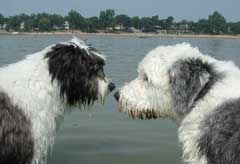