Exercise-induced collapse is a syndrome first identified in Labrador Retrievers which has since been observed in many other breeds, including Old English Sheepdogs. Dogs affected with EIC can generally withstand mild to moderate exercise, but after 5 to 20 minutes of more strenuous exercise and extreme excitement, EIC dogs may experience weakness and ultimately collapse. 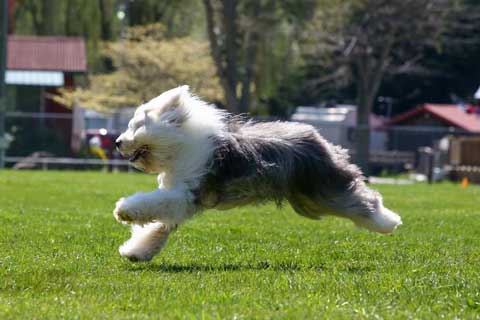 The degree to which dogs exhibit symptoms can vary, depending on several factors that induce EIC episodes. For example, a higher than normal ambient temperature and humidity level can make an EIC event more likely. Dogs that experience symptoms of EIC are also more likely to have intense or excitable personalities. Dogs with EIC are most likely to collapse when engaged in exciting activities – such as retrieving live birds in the case of a Lab. In OES, the excitement and exercise intensity of herding and lure coursing, for example, may put an EIC affected OES at greater risk of collapse.

When an affected dog begins to experience an EIC event, the following symptoms may be observed:

Symptoms typically worsen for 3 to 5 minutes after onset, even if exercise has been stopped.  It would be easy to confuse an EIC event with heatstroke, but unlike heatstroke, an EIC dog is usually back to normal within 5 to 25 minutes. While most dogs recover well and death is rare, the activity of an EIC affected dog should be stopped immediately at the first sign of wobbliness or loss of coordination.

The best treatment in most dogs affected with EIC is avoiding the activities that are most likely to trigger an event. If affected dogs are removed from participation in these activities and not exercised excessively, the condition does not progress and these dogs can live normal lives as pets.

The Genetics of EIC

Researchers at the University of Minnesota identified a mutation in the DMN1 gene that was highly associated with EIC in Labrador Retrievers. Further research confirmed that this same mutation is present in other breeds experiencing EIC, including OES. This particular gene is integral to maintaining nerve communication. Researchers believe that the mutation causes a breakdown in nerve communication during strenuous exercise, triggering an EIC event.

EIC is a hereditary condition with an autosomal recessive mode of inheritance.  Every dog has two copies of the DMN1 gene, and each copy may be either the normal version or the mutant form. In order to be affected, a dog must have two copies of the Mutant form.

Because a dog inherits one copy from each parent, both parents must be at least Carriers of the mutation (or Affected) to contribute a mutated copy of the gene.

The University of Minnesota has tested the DNA of 337 Old English Sheepdogs to date. Of those OES, only 3.6% tested as Affected, which is good news. Note that "Affected," does not necessarily equate to symptomatic. It does, however, suggest that those dogs are at risk for experiencing an EIC event. OES do have a 30% Carrier rate, which is significant and not far off from some breeds that have nearly double the rate of Affected dogs we see in OES. That tells us that we've been pretty lucky…so far. Fortunately we no longer have to rely on luck, because we have a simple DNA test to identify a dog's EIC status before breeding. Prudent breeding practices can avoid producing EIC Affected OES by mating Carriers to dogs that test Clear. Therefore, OESCA has just recently added EIC to the list of required tests for CHIC.

Should I Test My Dog?

While it goes without saying that breeders should be testing breeding stock, it may be wise for owners of individual dogs to have their OES tested. This is especially important if you are not aware of the EIC status of your dog's parents, and your OES leads an active lifestyle. The Veterinary Diagnostic Lab at the University of Minnesota can test blood or a simple cheek swab from your dog, and will be able to provide you with a result of Clear, Carrier or Affected for your OES. We encourage all people who test their OES for EIC to submit results to the Orthopedic Foundation for Animals (OFA) for publication in the database.