History Of The Old English Sheepdog 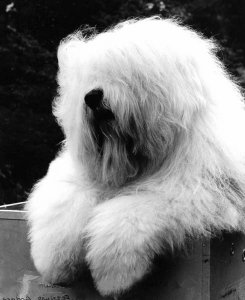 The origin of the Old English Sheepdog remains a question of keen interest to Bobtail fanciers, and is still open to new theories and discoveries. However, there are traces of evidence which place its origin in the early nineteenth century, centered in the Southwestern Counties of England. Some maintain that the Scottish Bearded Collie had a large part in its making; others claim the Russian Owtchar as one of the progenitors of the Old English Sheepdog.

Writings of that time refer to a "drovers dog" which was used primarily for driving sheep and cattle to market, and it is speculated that these drover's dogs were exempt from taxes due to their working status. To prove their occupation, their tails were docked...leading to the custom of calling the sheepdog by the nickname "Bob" or "Bobtail". Since this dog has been used more for driving than for herding, the lack of a tail to serve as a rudder, so to speak, has in no way affected its ability to work with heavier kinds of sheep or cattle.

The Old English Sheepdog was first promoted in the U.S. by Pittsburgh industrialist Wm. Wade in the late 1880's, and by the turn of the century, five of the ten wealthiest American families--the Morgans, Vanderbilts, Goulds, Harrisons and Guggenheims--all owned, bred and exhibited the Old English Sheepdog. In fact, the social prominence and importance of the owners and spectators at the Old English ring in the 1904 Westminster Show in New York prompted the show superintendent to discreetly advise the judge to "take plenty of time; the dogs in the ring are the property of some of our leading Americans". It should be noted here, that these prominent families also had kennel managers and staff to care for and groom their OES!!!!!

Below is an illustration (and caption) from The Old English Sheep Dog, by Henry Arthur Tilley, Revised Edition 1937. 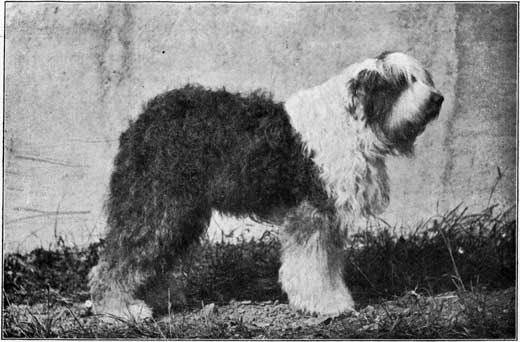 As his name appears in so many of the present-day pedigrees, it may interest readers to see a photograph of him. This unfortunately does not do him justice as he was out of coat; it shows him with a dark coat, whereas he was a beautiful blue grizzle. Still, it does reveal many of his good points, e.g. spring of ribs, shortness of back, length of neck, beautiful hocks, and length from hip to hock; but far more important was his grand character and strong constitution--which features were transmitted to his offspring

The dog pictured is from the early 20th Century--compare this dog to the present Standard for the breed! If you find his duplicate in your ring someday, you will be the envy of all who breed, show, and judge Old English Sheepdogs!

See the pedigree of CH Elkington Squire as listed in the OESCA database.

Below are some excerpts from an article entitled

by Nick Waters
As printed in the August, 2002, Issue of Dog News. 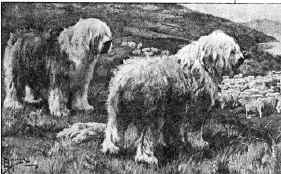 "Supporters of working dogs and those of show dogs have frequently never been good bedfellows. Both sides have their devotees who argue that each have ruined certain breeds."

"The Old English Sheepdog is one of the most ancient of British working breeds and has become one of the most instantly reconizable breeds of dog in the world and one of the most popular show dogs. Breeding for coat, which to a great degree defines the breed, now serves as a disadvantage to the breed as a working dog. Those familiar with working cattle and sheepdogs say its excessive length and softer texture renders it largely unsuitable to work in the weather, terrain and conditions in which the breed originally worked."

"Although most working Old English did not have the coats of their counterparts in the show-ring, many were kept cut short and it was the practice with sheep farmers to shear and dip their dogs with the sheep." 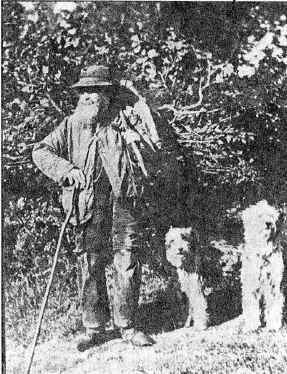 "Many would argue that the name is a misnomer as the breed was originally and until comparatively recently, an all-round versatile stock dog. ......Driving milking cows they would go steadily as they would with calves, but young spirited stock they would make move fast. One particular dog that sometimes worked horses soon learnt to get down flat after they had gone through a gate, to avoid any kickback from any of the horses. ......Some working Old English Sheepdogs were known to take on the trait of a Corgi when working stubborn moorland sheep and have a nip at their heels......"

"The history of the Old English Sheepdog is intertwined with the bygone days of the drovers...... The type of dog a drover needed was one with stamina, steadiness and the temperament that would see off any predators, would stand its ground against any rogue beast and would see off man attack by a bull or ox intent on mischief towards the drovers."

"In 1891 Drovers' Dog Shows were inaugurated, the purpose of this being for the improvement of the breeds drovers used and of their treatment. In 1894 the show was held at the Metropolitan Cattle Market and of the 78 dogs entered 20 were Old English Sheepdogs and Best Dog and Best Bitch in show were both Old English......"

Here is a downloadable PDF flyer about the breed published in 2012: OESCA_Breed_Pamplet