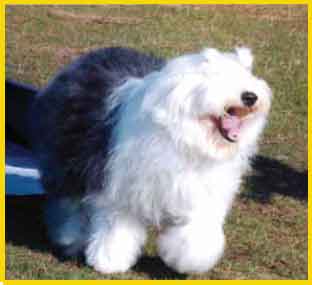 The Old English Sheepdog - More Than Just Another Pretty Face

Written By Kristine B. Loland for ShowSight magazine, May 2012

I think it's fair to say that many who are drawn to the Old English Sheepdog are initially taken with their looks. I don't mean to suggest that we are shallow people who cannot see beyond the hair. But whether it's the cute, fluffy puppy with the big black nose, or the beautiful full-coated show dog, this is a dog whose first impression is driven by its well-defined and unmistakable look. Perhaps we secretly covet their attention getting appearance. Certainly you cannot take one out in public and expect to remain inconspicuous.

With an Old English you have the best of so many worlds; a relatively large, robust, athletic, active companion who is nonetheless eminently huggable, intuitive, sensitive, outgoing, good natured and always up for a good time. And in the world of the Old English, a good time means spending time with their owners. This is a completely people focused breed, with a deep seated need to be with you.

Newcomers to the breed quickly learn three important lessons: the breed's reputation as a Velcro dog means you will never have any privacy ever again, the hair doesn't groom itself and your typical OES can remain a rambunctious adolescent until at least age three, often longer. In self-defense, we either quickly learn how to groom or develop an excellent relationship with a professional groomer. We often compromise, especially while living through the puppy and adolescent coat changes - when the mat fairies seem to come out in force, and no sooner have you finished brushing through the dog when you need to start over - and shave them down. Some companion OES spend most of their lives in some variation of shaved or a puppy cut. Even many a retired show dog gets shaved down for their convenience and ours. So only relatively rarely do we actually live with the look that first drew us in, which is pretty immaterial as the truth is that there is so much more to this breed than hair. 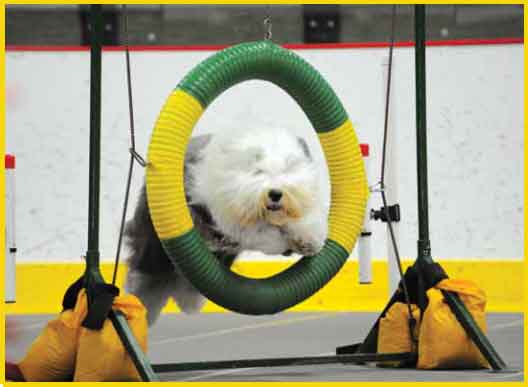 Training is a must. This is not a breed that ages gracefully. Waiting them out will rarely magically garner you a civilized companion any time soon. Many remain puppies at heart well into their senior years. When they age, it is usually suddenly, and the irony is that you often rue the many years you spent wishing they would finally grow up and stop using the back of your sofa as a spring board, your children as stand-in sheep and your kitchen counters as their personal buffet.

With their cute looks and wiggly bums, it is near impossible for many owners to reprimand them, a weakness most OES quickly cotton on to and exploit relentlessly. As avid students of human behavior, your average Old English is undeniably a better people trainer than your average OES owner is a dog trainer, and it shows

Through competing in agility, herding, obedience and rally I have learned that the breed is not inevitably held in great competitive esteem. Their fuzzy look and happy-go-lucky personality tends to lend itself to a reputation as a bit of a dilettante. It's not that they are in any way lazy or lacking in talent. It's just that they tend to have their own agenda and it may not coincide with your agenda - a divergence for which they make no apologies. 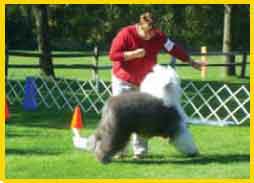 Though they have moments of brilliance, even sustained moments, it is a rare OES that doesn't at least occasionally feel that the prescribed exercises or courses can't be improved upon, and woe to the humor- impaired who cannot appreciate their creative flair. This is nonetheless a dog that takes team work very seriously (providing you don't expect mindless biddability). This is a thinking dog. And to your average Old English Sheepdog teamwork must be built on a foundation of mutual respect.

If they respect your leadership, the sky is the limit, or at least within your sights. But you cannot compel them to respect, it must be earned. And if they think you are unclear, unfair or just plain out of your league, you may find yourself alone in the ring while your OES is off entertaining the crowd, creating her own course or flirting with the judge. For some owners, these kinds of forays may prove too much to endure. Perhaps that explains why there are relatively few OES competing in companion and performance events. Personally, I enjoy the challenge and appreciate dogs that keep me humble and honest, not to mention endlessly entertained. Besides, when you do succeed it is that much sweeter. But there is no question that there are less demanding breeds out there.

"People-oriented and tactilely pleasing, whether being read to by children, penetrating the fog of dementia or simply brightening someone's day, THEY ARE BASICALLY IRRESISTIBLE." 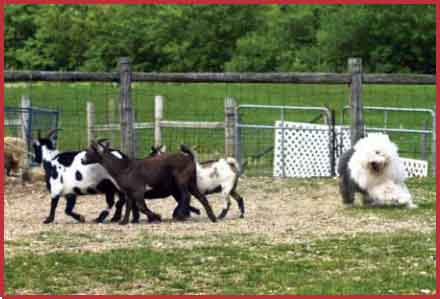 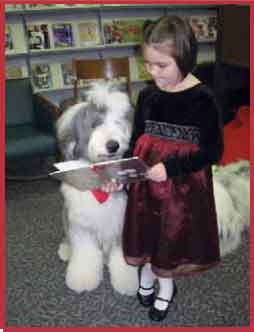 There is one area where a well-trained, well-socialized OES naturally excels - and, no, it's not the herding arena - though most OES instinct test well, there has been little to no selection for true working ability for so long, that while some OES may prove useful workers around the farm, few develop the kind of precision needed for higher level trialing. They tend to be extraordinary therapy dogs. It stands to reason, really. People-oriented and tactilely pleasing, whether being read to by children, penetrating the fog of dementia or simply brightening someone's day, they are basically irresistible.

Kristine B. Loland is a member of the Old English Sheepdog Club of America where she currently serves as a member of the Board of Directors, on the OESCA Health and Research Committee and as OESCA Agility Chair. She resides in Wisconsin with a pack of OES where she breeds an occasional litter, finishes an occasional breed champion, trains and competes in multiple venues with several OES and tries very hard not to let her sheepdogs run the house the way they run her life. Occasionally she even succeeds.

Reprinted with permission from ShowSight magazine, May 2012