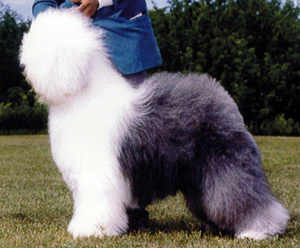 It was my pleasure to work with Diane on this interview. Diane has so many memories and so much experience we were only able to touch the top of the ice burg!! Her stories of sheepdogs of yesterday, her passion for the breed, her work on pedigrees and her willingness to share this is what made this interview a delightful and fulfilling experience for me. Thank you Diane, Adele MacAskill, MerryMops Reg'd OES, Uxbridge, Ontario.

1. What year did you become involved with the breed?

I was introduced to the OES breed way back in 1939, when my dad bought a new puppy for my mom before going overseas in WW 2. In 1944 another replaced the first after an accident. Dad came back to Canada late in1945. It was then that I decided that I wanted to not only have OES in my life, but to breed some of the best OES in the world, as soon as I was married and on my own. That happened in 1955, with the purchase of my first bitch Bonnie.

2. Of all the breeds there were why Old English Sheepdogs?

I'm sorry, is there any other breed to have?! Their temperament and patience cannot be beaten, they are unique, and although my parents had two Saints and two Pyrs over the years, among others, it was the OES that was always going to be my breed and only breed.

3. Can you tell us about some of the great dogs you have bred? Did you have a favorite one or two and if so why?

I like to think that all my dogs were great, but maybe for different reasons. Ch. Tarawood Flannel Pants CD, winner of seven BISs, for being not only a fabulous sire, but a superb baby sitter of four small children; Ch. Tarawood Beau Billy D, a wonderful show dog, who at the time set the record for BISs at nineteen. Ch. Tarawood Rags N'Tatters, a brood bitch who taught me what it was all about in raising puppies. Ch. Tarawood Blue Baron, my first American champion, and sale to the States, was the Best of Breed winner of the only three OES specialties in North America at the time, (OESCA, NEOESC,& OESCC) another first.

What a thrill and honor to a young Canadian breeder. My first OES and show dog Can. Ch. Tanglewood Farm's Bonnie Lynn C.D., arrived from the States, (no one was breeding in Canada since the late forties), an OES that never competed against another in her breed, but placed numerous times in the group to complete her championship. Bonnie was Canada's first obedience title holder, and taught me another side of the "dog game". Bonnie was a dog that would never leave the side of her two legged kids. Her life cut short by a fatal illness.

How can one say they have a favorite, when all my dogs gave me their all ,their devotion and tried so hard in the show ring, whelping box, or just hanging out, to prove it.

4. What was your greatest moment and if you would your worst?

My proudest moment in dogs was when Malcolm Fellows phoned me and told me that Dudley (Ch .Sir Lancelot of Barvan)] had won Best In Show at the "Garden" in 1975 . Dudley was also the Top Dog All Breeds, the previous year in Canada, topping off his dad's record of being number two All Breed in both 1967 & 1968. Dudley was from Barb (Vanward) Thompson's first litter, out of a Tarawood bitch and sired by my Ch. Tarawood Beau Billy D. No one could have been more proud or happier in the world than I. It still gives me goose bumps thinking about it. That was one of the best moments in dogs for me, but there have been other close ones too.

My worst time in dogs, is when I have had to hold one of my boys or girls when it was "their" time to say good bye. That is the cruelest time in a breeder's, or dog lovers life .

5. Can you tell a little something about the great dogs you have seen and competed against?

That is a hard question to answer as I've seen, and have had my hands on some beautiful specimens of the breed. I'll name only three that aren't with us anymore, and they are Ch. Baroness of Duroya and her daughter Ch. Rivermist Hollyhock, and Ch.Raffles Chelsea Buns. Some of the older breeders will remember these three great bitches.

6. What differences have you seen in the breed to-day versus in your early days?

The biggest difference I have seen is the way the dogs are shown today compared with years ago. The teasing, scissoring, backcombing, excessive coat and racing around the ring are almost circus like!

I would also like to see better heads, bone, top line, and shoulders on a lot of the dogs. Hind quarters, and mouths have vastly improved since the day I started. I sincerely hope that the sweet temperaments we have, stay the same.

7. What advice would you give to someone who is just starting out and wants to begin breeding and showing OES?

I would advise any person young or older to ask questions, listen, watch, and learn from breeders who you have learned to respect, who have a proven track record with dogs in the ring, in the whelping box, are diligent with their health records and testing. Save up, and buy the best bitch you can afford.

8. We have a number of health issues in or breed to-day, what would "tell" to-days breeders if you had a chance to?

I would say, learn about the problems the breed has, take part in the health surveys, and have your dogs tested. Do your part as a breeder and be honest with your dogs, yourself, and with fellow breeders.

9. I know that you no longer have any OES so?. how do you fill up your days?

Yes that is true, I no longer have any OES dogs, but I am surrounded by OES memorabilia of my own, my club work as secretary /treasurer, & club historian ([unofficial) of the OESOCC . This year will be lighter as I was also show secretary for our National Specialty show in 2007. Now I can concentrate on my quest for more information on the Canadian OES from 1903 - to the present day, hopefully for a book. Also I'll be able to see a little more of my kids, grandchildren and three great grandchildren. Gosh I'm getting old!

10. In closing, thank you for taking the time to answer these questions for the OESCA web-site. Do you have any final thoughts you would like to share with the readers?

Barb and Adele, it has been my pleasure in telling you about my time with Old English Sheepdogs. To the members and readers, please honor this breed, show the public what a smart breed it is, in obedience, herding, therapy, agility etc. Fight for it, in health, and the new docking fights that are bound to come up. This breed needs strong minded people, and more young people eager to protect it. I believe the breed is in good hands.