Home » About Us » Other Illnesses » Primary Ciliary Dyskinesia

PCD test information can be found on the Antagene website.

Note, the Antagene link above is not part of the below article.

Introduction: Primary ciliary dyskinesia (PCD), previously called immotile cilia syndrome (ICS), is a divers group of inherited structural and functional abnormalities affecting the cilia of the respiratory tract mucosa and other organs which results mainly in recurrent respiratory tract infections. In dogs, PCD is a rare disease but reported in more than 19 breeds, including Old English sheepdogs. The lack of coordination and ineffectiveness of the ciliary function result in a slow clearance of mucus from the airways; this in turn results in chronic mucus plugging and inflammation of nasal cavities, trachea and lower airways. As a consequence, clinical signs will include chronic respiratory abnormalities such as rhinosinusitis, bronchitis, bronchopneumonia and bronchiectasis (i.e dilation of bronchi secondary to chronic inflammation). These symptoms (sneezing, bilateral sero-mucous nasal discharge, productive cough, exercise intolerance, dyspnoea, and lethargy) commonly appear at a very early age
(i.e. weeks to months). Although the respiratory system signs are usually the most important, several signs related to pathology in other tissues with ciliated epithelia or microtubules can occur, such as otitis media, infertility in males and females, hydrocephalus, and renal fibrosis or dilation of renal tubules. Some dogs with PCD may present the "Kartagener's syndrome" which represents a triad of signs that includes bronchectasis, complete transposition of viscera (situs inversus) and chronic rhinosinusitis. While PCD may be suspected based on history, clinical signs, diagnostic imaging and endoscopy, final diagnosis requires the observation of ciliary structure abnormalities after ciliogenesis (i.e. culture of ciliated cells) of biopsies of ciliated epithelium (i.e. the nasal, tracheal or bronchial mucosa) with the use of transmission electron microscopy. 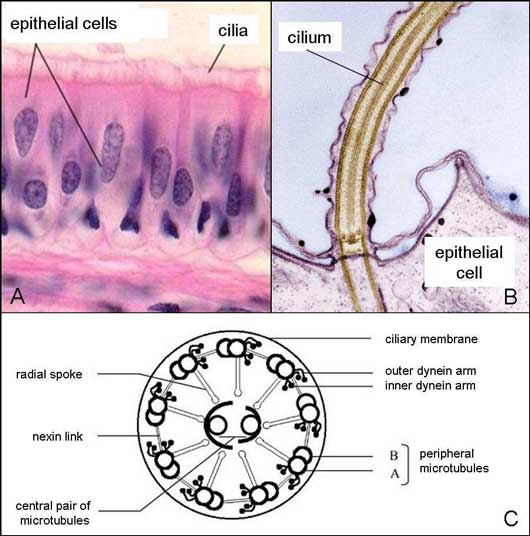 A. Microscopic view of the respiratory mucosa consisting of ciliated epithelial cells (i.e. presence of cilia at their apical surface).

B. Focus on the apical surface of the ciliated epithelial cell.

C. Inner structure of the transverse section of a cilium.

Even though PCD is not a curable disorder, it can frequently be managed for some years. A key element in this successful management is the adequate monitoring of infecting microorganisms and judicious use of antibiotics over time. The long-term prognosis is poor, since even in case of adequate management, the disease generally progresses over time and the response to treatment becomes poorer. It would be very useful to have a genetic test able to identify carriers and exclude them from breeding programmes.

History in Old English sheepdogs: Four Old English Sheepdog puppies (8-15 months old), belonging to two different but related litters, were referred to the small animal clinic of the Veterinary Faculty of the University of Liège. All dogs presented, since several months, recurrent chronic mucoid to muco-purulent nasal discharge, moist productive cough with episodes of dyspnoea, hyperthermia and anorexia, resolving only transiently with various treatments (antibiotics, mucolytics, nebulization). Thoracic radiographs showed severe bronchopneumonia with bronchiectasis in the cranial lung lobes. In one dog, thoracic radiographs showed situs inversus of the viscera (i.e. the cardiac silhouette and the stomach were in dextroposition) indicating Kartagener's syndrome. Endoscopy revealed inflamed mucosa, moderate to large amounts of mucopurulent secretions along all the upper and lower airway tracts. Analysis of these secretions (with a broncho¬alveolar lavage) was compatible with acute bronchopneumonia. Transmission electron microscopy analysis of sampled ciliated cells and of ciliated cells after ciliogenesis confirmed the diagnosis of primary ciliary dyskinesia.

Litter history and pedigree analysis: Pedigree analysis of the two affected litters indicated that the sire of the first litter was the grandsire of the second litter. Further breeders information and pedigree examination revealed finally six affected related litters. Initial pedigree analysis was compatible with a monogenic autosomal recessive pattern of inheritance of a genetic defect. A genetic defect is a mistake in a gene called a mutation. There are basically two kinds of mutations, dominant and recessive. Every cell in the body (except sperm and eggs) has two copies of each gene (one from the sire, and one from the dam). A dominant mutation is where one defective copy of a gene is enough to affect the individual, whereas a recessive mutation requires that both copies of the gene carry a mutation for the individual to be affected. In other words, if the dog is only carrier, i.e he has only one defective copy of a gene, he will be clinically healthy. Here the disease is recessive, in consequence, in theory, if both parents are carriers, 25% of the puppies will be healthy, 50% of the puppies will be carriers and 25% of the puppies will be affected. If only one of the parents is carrier, 50% of the puppies will be carriers. In other words, to get affected puppies both parents need to be at least carriers.

Genetic analysis: Based on this preliminary information, blood was drawn from about twenty Old English sheepdogs (5 affected and 15 clinically healthy dogs) for genetic testing. All dogs underwent also a complete physical examination. DNA was extracted from the blood and analyzed in the Department of Genetics at the Faculty of Veterinary Medicine of the University of Liège with the European project on canine genetics "LUPA".

The first aim of these genetic analyses was to confirm the pattern of inheritance of the disease. First genetic analyses were able to differentiate healthy, carrier and affected dogs with a good accuracy and confirmed the monogenic autosomal recessive pattern of inheritance. These first results clearly show the existence of a large number of carriers that are clinically healthy and used for breeding. In consequence, a large number of carriers and affected dogs must be present in the Old English sheepdogs' population. 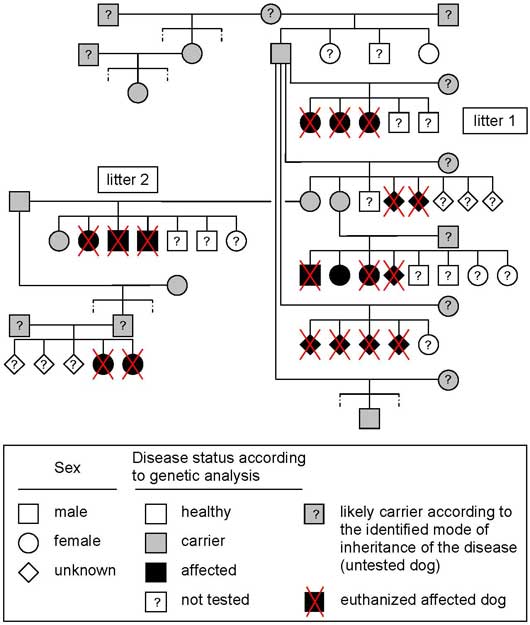 The second aim of these genetic analyses was to identify the genetic mutation in order to set up a genetic test able to identify healthy, carriers and affected dogs with 100% accuracy. At the moment, the region of the genome containing the genetic mutation has been identified. Unfortunately, the identified region of the affected chromosome still contains a huge amount of genes (about 150 genes) and their complete analysis would take a lot of time and cost a lot of money.

In conclusion, we need to study more affected puppies to have a better idea of the incidence of the disease within the Old English sheepdog population and to be able to identify the responsible gene of the disease.

So if you hear about any affected puppies, please contact us as soon as possible

You may also visit the University of Liége website.

Posted with permission from: