Home » About Us » Other Illnesses » Deafness/Hearing

"I'd Like An All White Headed OES, Preferably With Blue Eyes!"
or "Can You Hear Me Now?"

As an OES breeder, I occasionally hear the first question in the title of this article from a potential new OES owner. It always catches me off guard, even though I have heard it so many times. My first reaction is an emotional response - I want to say some smart remark back like "When you had your kids, did you order up a blond girl too?", but of course I would never say that. Then the scientist in me kicks in... thank goodness... and I look at this question as an opportunity to educate people regarding OES markings and their correlation with deafness. Most people don't even know that there is a correlation between markings (pigment) and deafness.

Some breeds of dogs normally have colored coats, and white trim. This includes Dalmatians. The white is actually not their real coat color, the "spots" are. The same is true in OES, the gray area is the real color, and the white is masking that color, usually on the head, neck, front legs and rear feet. The "trim" comes from areas of unpigmented (pink) skin, which produces white hair. If there is unpigmented skin in the inner ear, the nerve endings atrophy and die off in the first few weeks of the puppy's life, resulting in deafness.

Please note that you cannot tell the color of hairs in the inner ear by looking at any visible part of the dog's ears (including the hair around the ear canal). Although dogs with white hair on their ears can be deaf, many deaf dogs have colored ears as well.

Interestingly enough, a certain marking on OES that appears to be random actually should alert a breeder. Dogs with white stifles are more likely to produce puppies with more white than dogs with dark stifles. What the heck is a stifle you ask? The easiest way to describe it is where the "knee" would be on the back leg of a dog. Shetland Sheepdog breeders figured out this correlation a long time ago, and it seems to hold true in other breeds. 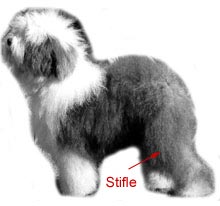 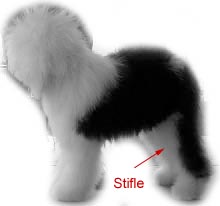 If OES breeders only selected for all white headed dogs in their breeding program, they would ultimately produce dogs that have less and less dark areas, which is related to deafness.

Eye color is also an integral part. Just as the masking of the gray results in white areas on an OES, blue eyes are really brown eyes that are masked by "white" markings. I have seen OES with brown eyes that have a little patch of blue in them. Think of this as an area of "white" in the eye. Other eye defects are correlated with color. Microphthalmia, or an abnormally small eye, is the most common eye defect seen in homozygous merles. Merling is a gene that causes large areas of a color. Homozygous merles have a "double shot" of this gene and have large areas of white.

Are there all white headed OES with two blue eyes that are normal hearing dogs? Absolutely. But if a breeder purposely selects for white heads with blue eyes, they are in effect, selecting for deafness. Yikes! If a potential puppy buyer sees a nearly all white OES puppy for sale, the hearing of this puppy should be tested before it is purchased.

Can You Hear Me Now?

A BAER test is the only 100% reliable method for determining that a dog is deaf (or for measuring the extent of its hearing loss). BAER (pronounced "bear") stands for "Brainstem Auditory Evoked Response" and is a procedure using computers to record the electrical activity of the brain in response to sound stimulation. This is the same test used to check the hearing of human infants, and measures the same range of hearing. This means that the test does not measure the full range of canine hearing, but it will tell you if your dog has hearing within the normal human range (some dogs will test as "deaf," but will still be able to hear very high pitches).

The test is not painful and can be performed on any dog over six weeks of age. (A puppy's ear canals don't open until they are about two weeks old.) Sedation is usually not necessary, but some dogs (especially puppies) don't like being restrained, or having wires hang from their face, so it can be performed while the dog is sedated. A clicking sound is directed into the ear through a foam insert, earphones, or headphones and the brain's response is recorded. Each ear is tested individually and the test lasts for only a few minutes.

There are only four vets in the State of Washington that I know of that can do this test. In other words, you are seeking the help of a specialist. The vets that I am aware of are Dr Michael P. Moore, at WSU; Dr. Michael Harrington in Tacoma; Dr Michael Ericson in Carnation and the Shelton Veterinary Clinic.

Below are scans of a normal hearing dog and a deaf dog. Only a qualified veterinarian can correctly interpret these. I would like to thank Dr Michael Ericson of Carnation for these scans.

Scan of Normal Hearing In Both Ears

Scan of Deafness In Both Ears