OES As a Working Dog

The Old English Sheepdog As A Working Dog

Written By Kristine B. Loland with Gale Fitzsimmons for ShowSight Magazine, March 2015 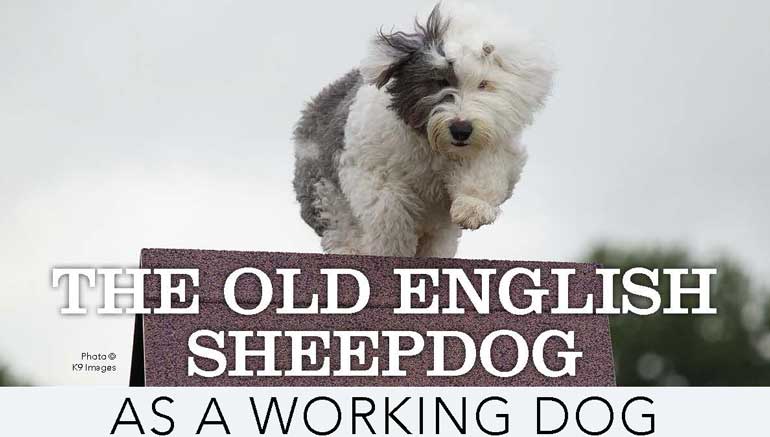 Please don't be fooled by the cute, fuzzy look. This is a working— specifically, a herding—breed and an immensely physical one at that. They have no reservations about getting up close and personal. Very personal. The body slam is their trademark, be it stock, other dogs or—unless persuaded otherwise, also known as training—their people. I'm a little surprised this characteristic is not mentioned in our breed standard and still shudder recalling one of my puppies picking up speed on the “back” part of a down and back in the breed ring, aiming directly for the dignified, very mature judge whom she was convinced was her new best friend and whom would no doubt appreciate her special brand of affection, also known as the quick stop, turn of body and hind-quarter slam into the recipient's knees. Disaster narrowly averted by reading her intentions and taking countermeasures. The truth is that many OES have an almost deliberate disregard for their body—and yours.

That said, by no means is this breed all brawn and no brains. To the contrary, this is a thinking breed. And what they think is that they know everything better than their handler. Most of the time, they are probably right. By herding breed standards —their typically infinite love of humanity notwithstanding—they are nonetheless probably more independent minded than most and inherently intelligent enough to carry it off.

This may have served them well as an all-around, dependable, take-care-of-basic-business farm dog. But in the modern world, with few job openings for excessively shaggy farm dogs, most find employment as pets and the occasional companion/performance competitor. I'll be honest... their independent, know-it-all outlook on life adds an additional degree of challenge when competing in performance and companion events.

For one thing, few, if any, have ever read the organizing body's regulations. This in no way dissuades them from believing to the core of their being that they know better and from adding their own interpretations to performance standards and requirements. As an Old English Sheepdog handler, you must quickly learn basic survival skills, such as humility and instant improvisational skills, or you are better served going with a more predictable breed. A prerequisite well-developed sense of humor goes without saying. If you're exceptionally lucky, the judges in your venue of choice are similarly well-endowed in the humor department.

I don't mean to imply that you will not observe Old English Sheepdog performances that will take your breath away. I've competed in multiple venues with OES that could do no wrong one moment, yet look like they had never been trained a day in their lives the next, sometimes only minutes later. Better OES trainers and handlers than I—and there are many— inevitably concede that even when you have the best trained OES, with the most exquisite aptitude, you can never be completely complacent about what they may do one moment to the next.

Attending my first AKC agility invitational my usually dependable (if not flashy by Old English standards) OES bitch refused to start round three until she had thoroughly thanked the timer for volunteering his time, kisses and all. Once she had finished her lovefest with the kind volunteer, she responded to my request to start our run—you ask an Old English; you demand at your peril—and turned in a near flawless run on a highly technical course, which thrilled me to no end. Especially as this is a breed not thought to excel on this type of challenge and under an English judge at that, which I felt was especially fitting. With many thanks to our instructor, a Terv breeder/agility judge, who, through repeated exposure, has developed her own affinity for the breed and who refuses to believe that the OES's greatest performance handicap is anything other than their handlers. I never argue with her. I've learned the hard way that she is always right. Instructors like her are worth their weight in gold for all of us in the OES performance community. 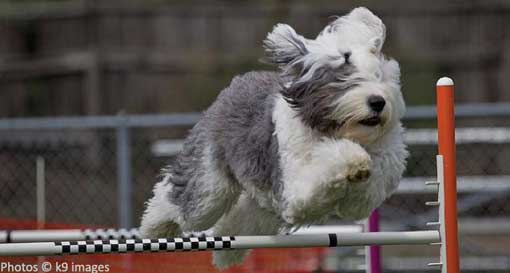 Still, there's nothing like being surrounded by hundreds of your all-breed peers, not to mention John Q. Public and his children—the latter almost always an OES favorite—with an almost nine-year-old Old English Sheepdog that looks for all the world like she's never been in public before, that then turns around and pulls out all the stops. Minutes after her run she was working the OESCA Meet-the-Breeds booth, off lead, mingling, in great company and working the crowd as only an Old English can. You learn to go with the flow. And you learn to enjoy and appreciate both the highs and the high jinx of this breed equally.

In the herding context, it's a mixed bag. I know I go against conventional wisdom here, but, quite honestly, as breeders, we have not selected for herding aptitude to any significant degree. The pressure to try to maintain soundness, physical type and acceptable temperament is probably challenging enough.

True, our breed is by its original design not likely to excel in competition flavored by and favoring strong eye breeds, like the Border Collie. We've already established that subtly is not the Old English Sheep-dog's forte. Light stock will often quickly feel overpowered by our breeds in your face approach, adding to the competitive challenges at the trial level, especially. And sometimes we accept enthusiasm and strong prey drive as proof of herding instinct, if not ability.

Every so often, an individual OES will excel in herding and give us all hope that the ability is still there. More frequently— and, again, hampered by their handler's ability—we see overly enthusiastic dogs, or, perhaps, like one of mine, the playfulness aspect takes over. I had one bitch that would work enthusiastically until she felt she was being micromanaged and by an idiot, at that. I'll grant her the latter. I don't know about most of you, but a feel for stock is not in my personal pedigree. Still, one day, her sense of fun got the better of her and she play-bowed to the wrong cranky, cornered goat. He head-butted her. I took him to task, but she still took it personally. On another notable occasion, in the midst of a beautiful, rare drive with a larger flock of goats, she got carried away and dropped and rolled in the beautiful spring sunshine. The goats and I drifted towards her in disbelief. I retired her from herding shortly thereafter. The goats were relieved. As was I.

It goes without saying that obedience is its own special challenge for this breed. Agility may allow for some creativity. Things like herding and nose work and tracking, relying as they do on inherent instincts, give the dog some creative freedom. But obedience, here, the breadth of acceptable performance standards is narrow. Very narrow. Especially according to your average creative OES.

An OES generally doesn't mind doing something the same way maybe twice. After that, it gets old and the onus is on the handler to keep it fresh. Very few of us are truly up to the challenge. I find this the most challenging venue of all. I recall arguing vehemently with one of my girls about sitting at the start of the off-lead heeling in novice. The bitch is one of the smartest OES I have ever known. But every title in every venue with her has been hard-earned and then some. She finally sat—I was all but begging the judge to dismiss us long before then.

I love the breed. I hope I never, ever find myself without an Old English Sheepdog. But easy? Never.

Kristine B. Loland acquired her first Old English Sheepdog in 1986. She made her agility debut at the Old English Sheepdog Club of America's 2001 National Specialty, and has been competing in agility, obedience, and, more recently, rally and occasionally herding with assorted Old English Sheepdogs since then. She has also served OESCA in various capacities, currently as Performance Chair.