Depth and Breadth of Pedigree

Home » About Us » Breeding & Reproduction » Depth and Breadth of Pedigree

Written by Dea Freiheit
Download a printable version of this article by clicking this link: Depth_and_Breadth_of_Pedigree.

While in this article I refer to hip dysplasia, these same principles apply when selecting dogs to breed to improve other health issues in OES, as well as conformation issues. For the purpose of this article, I will assume that the bitch in question has been deemed worthy of being bred. This minimally means she is of sound temperament, is healthy; both genetically and physically and also that she has good quality conformation that merits breeding.

One of the most challenging and rewarding decisions that reputable breeders make is to which stud dog they should breed their bitch. Breeders use many tools to make this choice, the most important of which is experience.

Again, the potential stud dog must meet the minimum temperament, health and conformation requirements, just as the bitch must. Health testing can include OFA, CERF, BAER, heart and thyroid tests. Conformation considerations include many different things. How is his head? Does he have good topline? Is he square? Does he look good coming and going? How is his reach and drive, is it balanced? These are just a few of the considerations to be made.

Pedigrees also play an important part in a proposed breeding. There are two different ways to assess pedigrees. One is the depth of pedigree and the other is the breadth of pedigree.

Depth of pedigree is a term used to describe an analysis of at least the first 3 generations in the pedigree. The traits and characteristics of these 14 dogs are analyzed. An example of such a pedigree follows.

In the pedigree at right, we see the names of the stud dog being considered "Ch Super Stud", his father "Ch Blue Boy", his mother "Ch Sweet Mama", and his grand parents and great grandparents.

Notice that his father "Ch Blue Boy" is also his maternal grandfather. Most breeders would consider this to be a line breeding. This breeding should theoretically concentrate "Ch Blue Boy's" genes slightly more than other dogs in the pedigree.

Using the 4 symbols on the next page, we can do a breadth of pedigree analysis regarding hips in the breeding of Ch Blue Boy and Ch Sweet Mama. We know from the previous example of depth of pedigree that they produced a dog named Ch Super Stud. What that pedigree doesn't show us is information about Ch Super Stud's littermates, but a symbol pedigree will reveal that information. 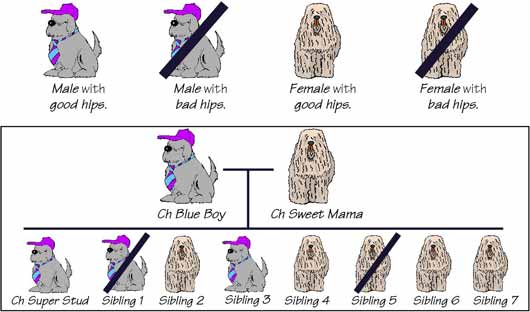 By analyzing Ch Super Stud's siblings in the symbol pedigree, we can see that the majority of puppies in his litter have good hips. His parents are not totally breeding true for good hips, but the majority of their offspring have good hips. This would indicate that Ch Super Stud came from parents that are prepotent for good hips. Prepotency is defined as the capacity, on the part of one of the parents, as compared with the other, to transmit more than his or her own share of characteristics to their offspring.

It would appear from this example that Ch Blue Boy's genes for good hips (see previous page) are indeed more concentrated in Ch Super Stud. In this case, using only hip dysplasia as our criteria, Ch Super Stud is a good choice to improve our bitch's hips in her progeny.

This example of using the breadth of pedigree emphasizes the necessity to learn as much as you can about not only the sire and dam of a litter, but also their siblings. This is an important tool to utilize when considering a contemplated breeding.